While every state is fighting a nationwide opioid epidemic, Sussex County Health Coalition in partnership with PMG Consulting is quickly becoming a nationally recognized coalition leader in addressing the social determinants of health. 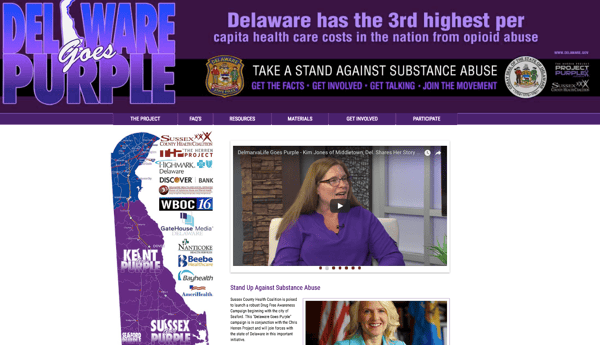 The initiative is part of a larger Delaware Goes Purple initiative, a statewide awareness campaign
building off of the The Herren Project and Project Purple. The Herren Project is a non-profit foundation established by former NBA player Chris Herren that assists families and individuals struggling with addiction through awareness, education, and advocacy.

During the launch of the Sussex Goes Purple event, representatives Danny Short, Tim Dukes, and Harvey Kenton, stood beside Lieutenant Governor Bethany Hall Long to read a proclamation signed by every representative of the house and senate. This proclamation demonstrated the bipartisan solidarity for this serious issue and to support what is becoming the statewide awareness and anti-stigma campaign.

As Mike Vincent, the Sussex County Council president, began speaking he thanked the crowd for being at the event. “It should be important to all of us. It is going to take all of us to change this.” The demonstration of the state legislature, county leadership and town mayors show the level of concern and focus that the heroin epidemic has in Delaware.

He continued with the startling statistic that last year Narcan was used five hundred and seventy times. Sometimes it has been used twice on the same person in the same day. He ended with a hopeful message: “Someday this will not be an issue.”

Lieutenant Governor Bethany Hall Long took to the podium afterwards. “Every day we lose someone. We’re losing a child- we’re losing a dream.” she stated before giving another proclamation to Sussex Goes Purple which applauded the efforts of Sussex County Health Coalition.

Earlier this week, I attended the "Going Purple" event with Project Purple, an outstanding organization that assists individuals and families struggling with addiction. We were joined by former NBA star Chris Herren, who shared his own troubles with addiction and recovery. pic.twitter.com/USvlRU3xCT

Highlighting Innovation and Actions to Address Social Determinants of Health

The CAST Tool was implemented as the assessment process used by the Sussex County Health Coalition to analyze the capacity of the substance abuse treatment system in Sussex County. The report it generated outlined findings in a way that promotes dialogue across the county on how a myriad of stakeholders can work together to build sufficient capacity to serve the needs of Sussex County residents.

It started with curiosity, a beer then deep shame and regret. Growing up his father was an alcoholic, but he didn’t recognize it until later in life. “The image they showed us in school didn’t look like my Dad.” he told the crowd. He started drinking beer at thirteen because he wanted to know why his dad liked them so much.

He was the star basketball player through his high school career. He graduated with offers to play from all over the country but at first stuck to home. He recalled one night where he came in and found his roommate and a girl acting suspiciously. “I thought I would try it once and then walk away from it. I didn’t know at eighteen it would take fourteen years to walk away from it.”

From cocaine it moved to oxycodone and other painkillers. After the ex-Celtic professional basketball player moved to Italy to play, he became addicted to heroin. He brought the addiction home and it changed his world. At twenty-four he had overdosed and hit a person.

He continued to overdose four times. After the fourth overdose he was being escorted out of the hospital when the police officer pulled him aside and told Chris how much he looked up to him as a kid. As Chris started to leave the hospital, he told himself that was it. “The best thing I thought I could do for my family was kill myself.” He was stopped by a nurse who once knew his now deceased mother. She called every rehab place and NBA player Chris Muller sponsored his newest stint. After leaving to see the birth of his newest son he returned and has been sober ever since.

“There are more treatment centers, more rehab centers but we still haven’t changed youth education.” Chris stressed during the questions and answers part of the night. “Focus on prevention and education. Until we change that- more people will die.”

This year is the first step in creating awareness about substance abuse and the dangers of opioids through Delaware Goes Purple. We needed to gauge the interest of our grassroots partners on becoming a part of the strategy to fight this epidemic and we were overwhelmed by the outpouring of involvement and support. Initially, Sussex County Health Coalition identified Seaford as a high need area. We began with with “Seaford Goes Purple” and had hoped we could expand through Sussex County. Our communities are so passionate about addressing this epidemic that we have seen widespread expansion through Kent County and our neighboring Maryland Counties.

Northern Delaware partners are emerging through NAMI, Attack Addiction and neighborhoods. This initiative has been driven by the community. It is everywhere on social media, TV and visible in local communities. Next year we hope to follow suit with our Maryland Partners like Talbot County MD and engage even more partners and community education events. We will be stronger. This is a long term initiative to address this epidemic and we will be engaged as long as our youth are being initiated into substance use and our adults are still dying each and every day.

Visit www.delawaregoespurple.org to view all the resources your community needs to get started.

If you or someone you know is in need of assistance with substance abuse find help at one of the websites below: